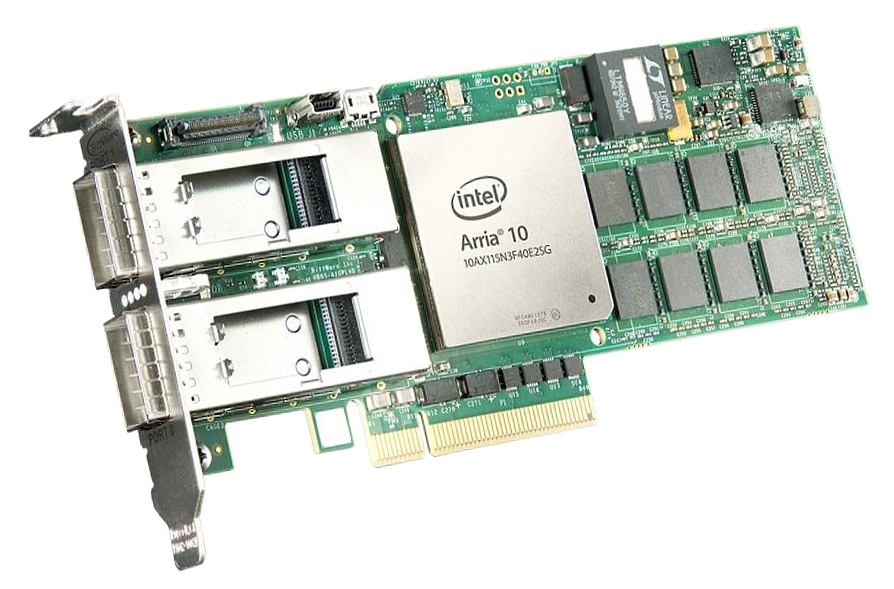 The BittWare A10PL4 FPGA card is built around the power efficient and high-density Intel Arria 10 GX. It is designed for Signals Intelligence, cyber security, network processing, broadcast, instrumentation, and many other compute and storage applications.

The A10PL4 is enabled for high-speed networking with two front panel QSFP cages, each supporting 40 GbE or four 10 GbE channels, and SPF+ compatibility.

With a full height panel, timestamping and precision timing module at 1 PPS and reference clock inputs and outputs is available.

A utility header provides a 1GbE interface, a PPS input, and a USB 2.0 interface with USB Blaster for debug and programming support.

Memory card options include up to 128 GBytes of DDR4 with optional ECC (error-correcting codes).

The board also features flash memory for FPGA images, and the board’s MAC ID is in PROM.

Access to the BMC is via PCIe or USB. BittWare’s BittWorks II Toolkit also provides utilities and libraries for communicating with the BMC components at a higher, more abstract level, allowing developers to remotely monitor the state of the board.

BittWare offers complete software support for this card with its BittWorks II software tools. The BittWorks II Toolkit serves as the main interface between the BittWare board and the host system. The Toolkit includes drivers, libraries, utilities, and example projects for accessing, integrating, and developing applications for the BittWare board.

BittWare offers firmware for the Arria 10 FPGA on the A10 family PCIe boards, targeted specifically for networking applications. BittWare’s FPGA framework provides a solid base for your application, including the following:

BittWare has also partnered with several companies to offer solutions for networking and financial acceleration:

Please use our FPGA Board Selector to find your preferred model.