This features parallel operation of the IPMs. Fast switching frequencies and accurate pulse width resolution make for fine PWM control. This power supply switches 40 kA at 100 kHz PWM to drive an inductive load (electromagnet coils). The supply consisted of sixteen IPM-16PPs operating in parallel at 2.5 kA per module for ~ 10 ms. The figure shows the collector-emitter voltage of the IGBT (Ch2) and the current in the load (Ch3). Midway through the pulse, the pulse width was changed to change the current in the load. 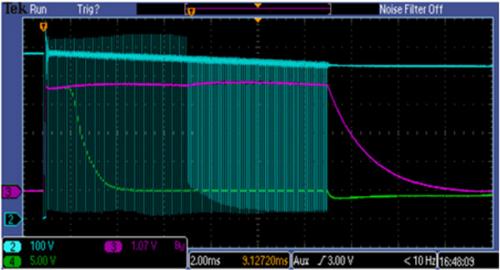 This PWM supply steps the current in a plasma arc. Using the fast switching characteristics of the IPM-16P (1 MHz), the supply was used to produce a current waveform in a resistive load that first jumped to 5 kA and then later upped to 10 kA. The fall time for the current was set by the L/R time of the load.

EHT developed a 10 kV, 1 kA electron gun driver. This power supply used 12 IPMs in a series stack configuration with fast rise/fall times. The power supply was used in an intense plasma physics laboratory environment, where high voltage noise isolation was important. The figure shows the inverted load voltage (Ch1), the collector-emitter voltage across the series stack as measured with a resistive voltage divider (Ch2) and the gate signal (Ch4). The rise time was less than 40 ns. Other potential applications include: Klystron drivers, particle accelerator modulators, and tube replacements.

This IPM-4PP-based supply drives piezoelectric crystals. The supply has an adjustable output voltage (up to 1 kV) and current limited load (1 A) to avoid damage to the crystal. The supply drives the crystal at 100 kHz. The piezoelectric crystal was part of a custom fast puff valve designed for precision gas handling control in fusion experiments. The figure shows the collector-emitter voltage across the IGBT during switching.

To drive series resonant (LC) tank circuits, this dual IPM-16P power supply was designed. EHT half-bridges are used to drive coils and antennas to generate inductively coupled plasmas and helicon plasma waves. These designs can be operated at high frequency (< 5 MHz). EHT has produced tank circuits with high Q ranging from 10 – 60, which allows the half-bridge to produce high voltage (40 kV) across the antenna. Higher power is achieved with a transformer or more parallel IPMs. A rectifier can be added for fast capacitor bank charging, producing a DC output on the capacitor.