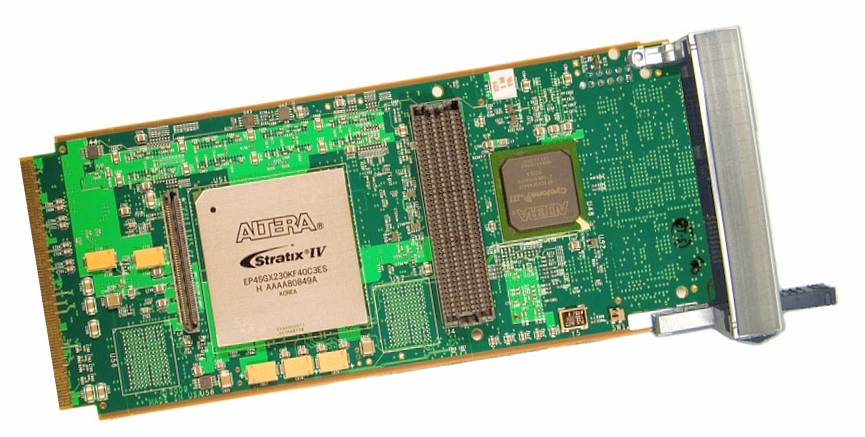 Based on Altera’s Stratix IV GX FPGA, BittWare’s S4-AMC (S4AM) is a mid- or full-size, single wide AdvancedMC that can be attached to AdvancedTCA carriers or other cards equipped with AMC bays, and used in MicroTCA systems. The S4AM features a high-density, low-power Altera Stratix IV GX FPGA designed specifically for serial I/O-based applications, creating a completely flexible, reconfigurable AMC. Providing enhanced flexibility is the VITA 57-compliant FMC site, which features 8 SerDes, 80 LVDS pairs, and 6 clocks directly to the FPGA. The board also provides an IPMI system management interface, a configurable 15-port AMC SerDes interface supporting a variety of protocols, and a front panel 4x SerDes interface supporting CPRI and OBSAI. Additionally, the board features 10/100 Ethernet, Gigabit Ethernet, 2 banks of DDR3 SDRAM, 2 banks of QDRII+ SRAM, and Flash memory for booting the FPGAs and FINe.

The Stratix IV GX FPGA interfaces to 3 ports (1, 2, & 3) in the AMC common options region, and 16 ports in the AMC fat pipes region (4 – 15, 17 – 20). These 19 ports provide a network data and control switch fabric interface on the AMC connector, with 12 supporting up to 6.25 GHz, 3 supporting up to 3.125 GHz, and the remaining 4 providing rear-panel GPIO. All AMC clocks are also connected to the Stratix IV GX. The front panel provides an additional 4 SerDes via an Infiniband-type connector, along with 10/100 Ethernet, 2 RS-232 ports, and a JTAG port for debug support.

The FINe III provides GigE via the common options region, along with 10/100 Ethernet and an RS232 monitor port on the AMC front panel, and is connected to the FPGA via a local control bus.

The S4AM features an FMC (FPGA Mezzanine Card) site, which provides 8 high-performance SerDes and 80 LVDS, along with clocks, I2C, JTAG, and reset connected to the Stratix IV. The site is based on the VITA 57 mezzanine standard for FPGA I/O, enabling designers to customize the S4AM to their individual needs with optional FMC I/O boards. A variety of I/O or processor FMCs are available integrated with the S4AM.

BittWare offers complete software support for the S43X with its BittWorks II software tools. The BittWorks II Toolkit is a collection of libraries and applications for BittWare’s Stratix IV and V FPGA-based boards. Designed to make developing and debugging the applications for BittWare’s boards easy and efficient, the Toolkit provides the glue between the host application and the hardware. The Toolkit supports 32-bit, and 64-bit Windows and Linux platforms.